In previous lessons, we used Venn diagrams to represent relationships between sets. Let's look at example 1 below.

Example 1: In Greenville Middle School, two classes will be merged into one in order to reduce costs. If the students in Band and Chorus are combined into one new class, then which students will be in that class?

Analysis: This problem is asking us to find the union of Band and Chorus. To solve this problem, we must list all students who are in Band, in Chorus, or in both. Note that Derek is in both sets, and therefore, in their intersection. However, Derek is only written once in the union.

Definition: The union of two sets A and B, is the set of elements which are in A or in B or in both. It is denoted by A

A union is often thought of as a marriage. We use "and" for intersection" and "or" for union. Let's look at some more examples of the union of two sets.

Analysis: Shade elements which are in P or in Q or in both. The shaded region in the Venn diagram below indicates P Note that the elements 6, 12 and 18 are in both sets (i.e., in the intersection of P and Q). However, these elements are only written once in the union.

Analysis: X is a subset of Y. So all elements in X are also contained in Y. 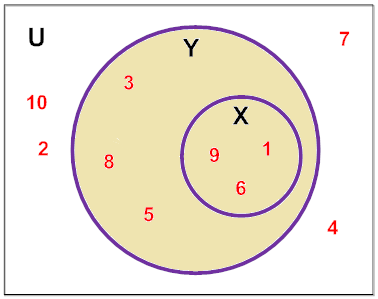 In example 3, since X

Y = Y. This relationship is defined below.

Another way to define the union of two sets is as follows:

Analysis: These sets are disjoint, and have no elements in common. Thus, A Example 4 is a straight forward union of two sets. Disjoint sets have no elements in common. Therefore the union of A and B has no common elements. Since it is not possible that dogs in A are also cats in B, we are sure that the numbers of elements in the union is sum of all dogs in A and all cats in B. Thus, the union results from the addition of all elements in both sets.

The union of two sets A and B, is the set of elements which are in A or in B or in both. It is denoted by A

B, and is read "A union B". The formal definition of union is shown below:

Directions: Draw and label a Venn Diagram to help you answer each question below. Select your answer by clicking on the corresponding button. Feedback to your answer is provided in the RESULTS BOX. If you make a mistake, rethink your answer, then choose a different button.