Until now, we have examined sets using set notation. We know from previous lessons that the following conventions are used with sets:

Another way to look at sets is with a visual tool called a Venn diagram, first developed by John Venn in the 1880s. In a Venn diagram, sets are represented by shapes; usually circles or ovals. The elements of a set are labeled within the circle. Let's look at some examples.

Example 1: Given set R is the set of counting numbers less than 7. Draw and label a Venn diagram to represent set R and indicate all elements in the set.

Analysis: Draw a circle or oval. Label it R. Put the elements in R. 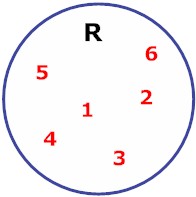 Example 2: Given set G is the set of primary colors. Draw and label a Venn diagram to represent set G and indicate all elements in the set.

Analysis: Draw a circle or oval. Label it G. Put the elements in G. 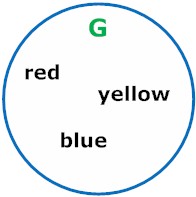 Example 3: Given set B is the set of all vowels in the English alphabet. Draw and label a Venn diagram to represent set B and indicate all elements in the set.

Analysis: Draw a circle or oval. Label it B. Put the elements in B. 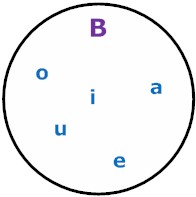 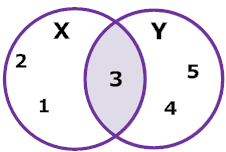 Analysis: To find the union of two sets, we look at all the elements in the two sets together. 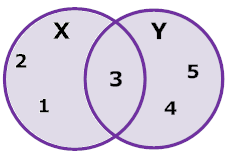 The union of two sets is written as

and is read as "X union Y". It means "X or Y". Let's compare intersection and union.

The examples in this lesson included simple Venn diagrams. We will explore this topic in more depth in the next few lessons. We will also learn more about intersection and union in this unit.

Summary: We can use Venn diagrams to represent sets pictorially. Venn diagrams are especially useful for showing relationships between sets, such as the intersection and union of overlapping sets.