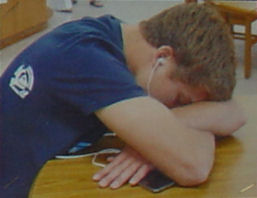 Research has shown that teenagers don't get enough sleep at night and go to school tired. Some experts believe the cause is biological. Others believe that teenagers stay up late because of adolescent distractions. Early high school start times can also contribute to teens' tiredness. This article will explore possible causes and solutions to this problem.

Research shows that teens need eight to nine hours of sleep at night, as compared with eight hours needed for adults. However, they are not getting enough sleep. A recent study at Drexel University of students aged 12 to 18 found that "20 percent of those studied got the recommended eight or more hours of sleep during school nights with the rest getting less than eight hours. The average sleep for U.S. adolescents is seven hours..." [1] A study of Rhode Island teenagers found that "85 percent were chronically sleep-deprived and accumulated a minimum 10-hour sleep deficit during the week. Forty percent went to bed after 11 p.m.; 26 percent said they usually got less than 6.5 hours on school nights." [2] Thus, sleep deprivation in teens is causing a growing concern among researchers, educators and parents.

So why aren't teens getting enough sleep? For one thing, they are staying up late. A variety of things can contribute to this night-owl tendency among teens, including social life, caffeinated drinks, electronic media such as computers, TVs and cell phones. Other factors include procrastinating on homework, and even depression. Adolescent work schedules are also a concern. Teens who work more than 15 hours a week at a job have less time for sleep.

Sleep deprivation in teens may have biological causes. Some experts believe that teens' body clocks start later. Tests by a professor at Oxford suggest that "students perform better in the afternoon, because their body clock is programmed about two hours later, possibly for hormonal reasons." [3]

Some experts believe that biological changes in teens affect their ability to sleep. A recent study found that "biological changes that take place in puberty keep kids from being able to fall asleep as early as when they were younger." [2] Another study "measured the presence of the sleep-promoting hormone melatonin in teenagers' saliva at different times of the day." They learned that "the melatonin levels rise later at night than they do in children and adults -- and remain at a higher level later in the morning." [4]

Lack of sleep affects teens' ability to function at school. A recent study showed that "sleep deprivation can affect mood, performance, attention, learning, behavior and biological functions." [4] In less clinical terms, "Daytime sleepiness makes it difficult to concentrate and learn, or even stay awake in class. Too little sleep may contribute to mood swings and behavioral problems. And sleepy teens who get behind the wheel may cause serious — even deadly — accidents." [5]

The typical start time for most high schools is 7:00 am, which can exacerbate this problem. Some schools have experimented with later start times. The study at Oxford found that "By delaying the start of school by one hour, and moving more demanding subjects to later in the day, then absenteeism and depression will fall... But that does not mean young people should be indulged and allowed to stay in bed late." [6] Researchers at Norwalk Hospital's Sleep Disorders Center in Connecticut found that "Teens whose high schools have a delayed start time sleep longer and report less daytime sleepiness." [7]

One solution is for parents to impose earlier bedtimes on their teenagers. A recent study found that "Teens whose parents pack them off to bed at 10 p.m. are less apt to become depressed or have suicidal thoughts than their peers who stay up much later." [8] It should be noted that there is a big difference between having suicidal thoughts and being suicidal. In any event, parents can strive to get their teens less wired at night. This can be achieved by discouraging them from drinking caffeine past 12 noon, and by keeping TVs, computers, and especially cell phones out of their room at night.

Some parents may find it difficult to take these suggestions without imposing more rules on their teens' daily life. Discussing the importance of sleep with teens will make it easier. Since all teens are not the same, parents should use their parenting experience to best help their teens with sleep.

In summary, teenagers are not getting enough sleep on school nights. Sleep deprivation in teens is prevalent enough to cause a growing concern among researchers, educators and parents. Research has shown that lack of sleep affects teens' ability to function at school. Sleep deprivation in teens may have biological causes according to some studies. Teens and their parents should take responsibility for the fact that teens need eight to nine hours of sleep to function at school. Parents can discuss the need for sleep with their teens, and try the suggestions outlined above.

[5] Teen sleep: Why is your teen so tired? [Source: CNN.com from MayClinic.com]

This article is by Gisele Glosser. You can find me on Google.